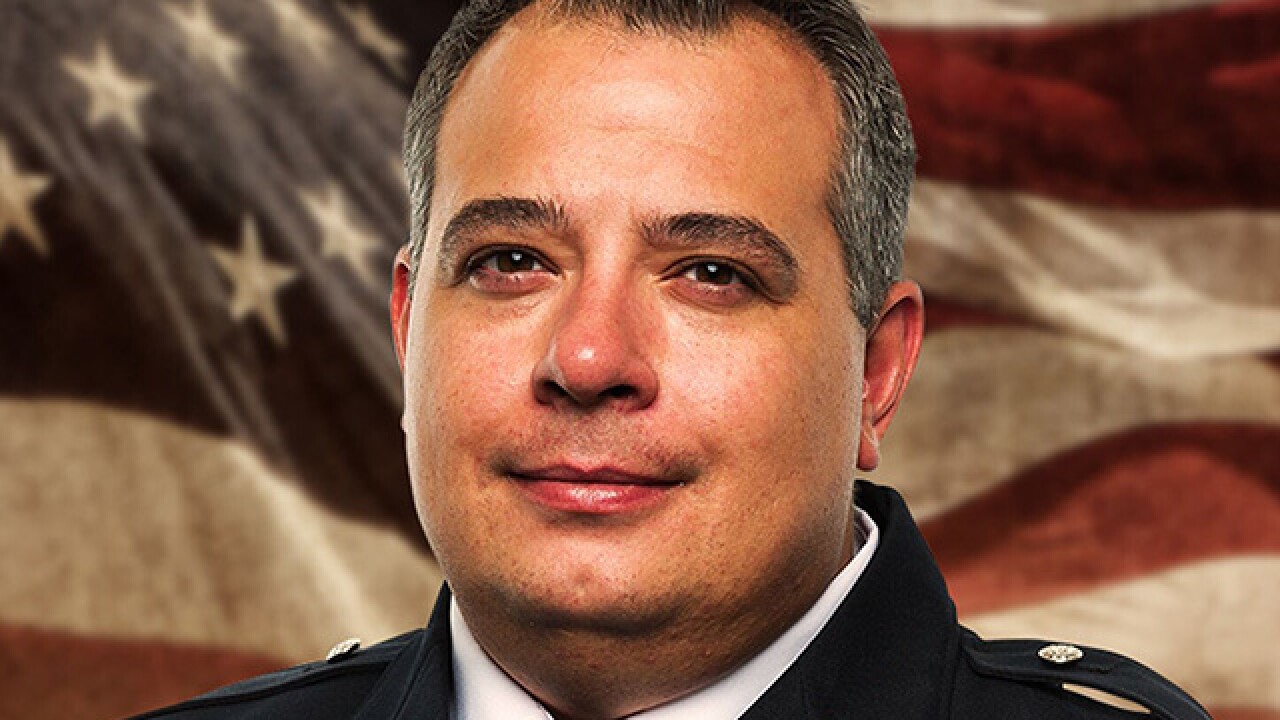 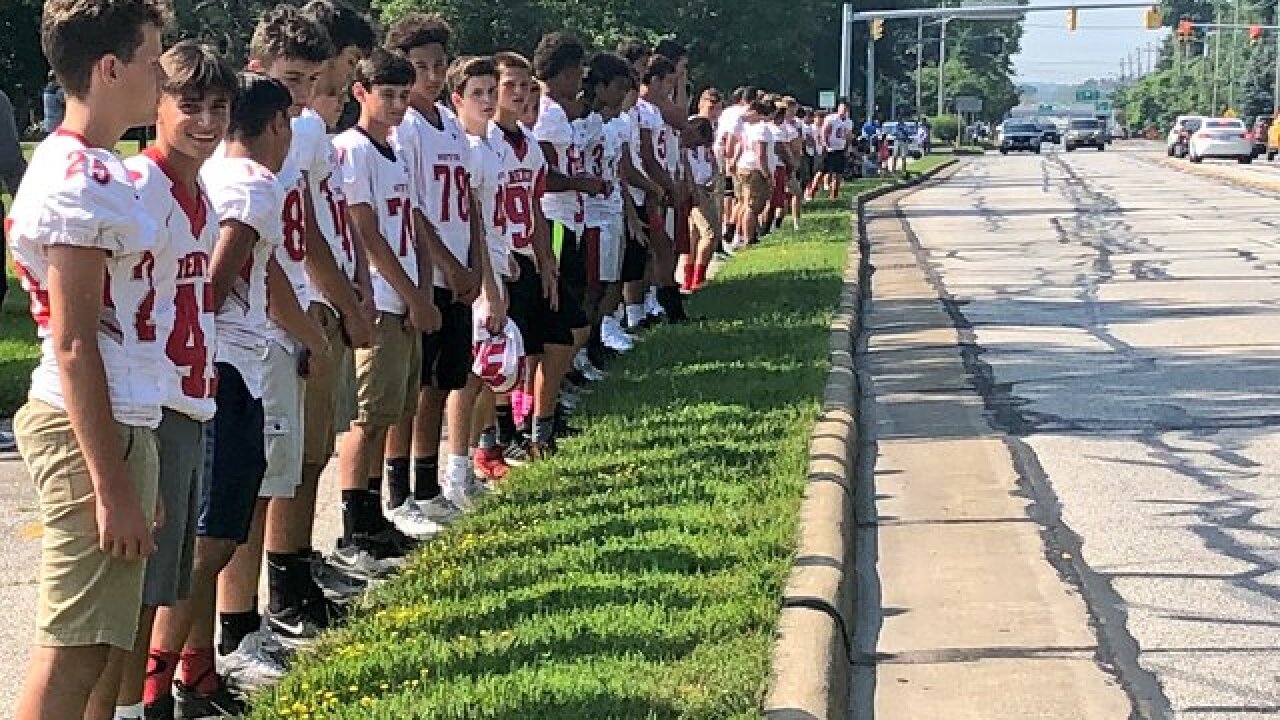 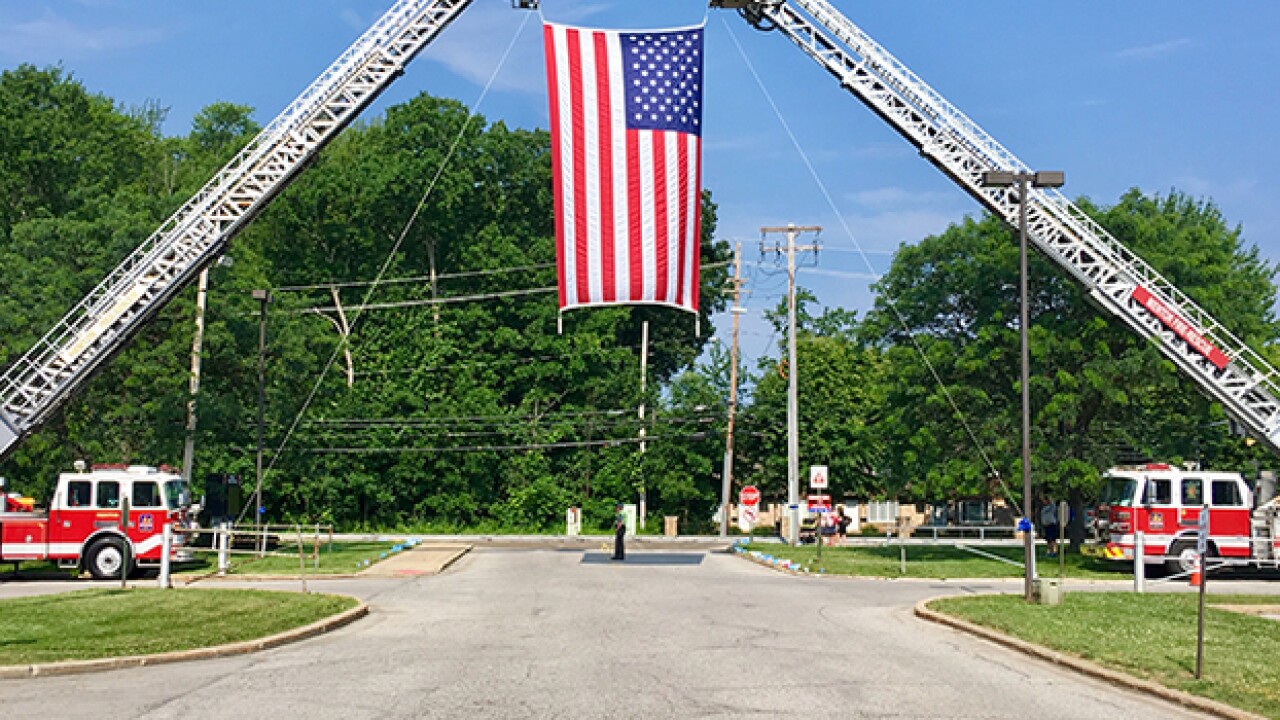 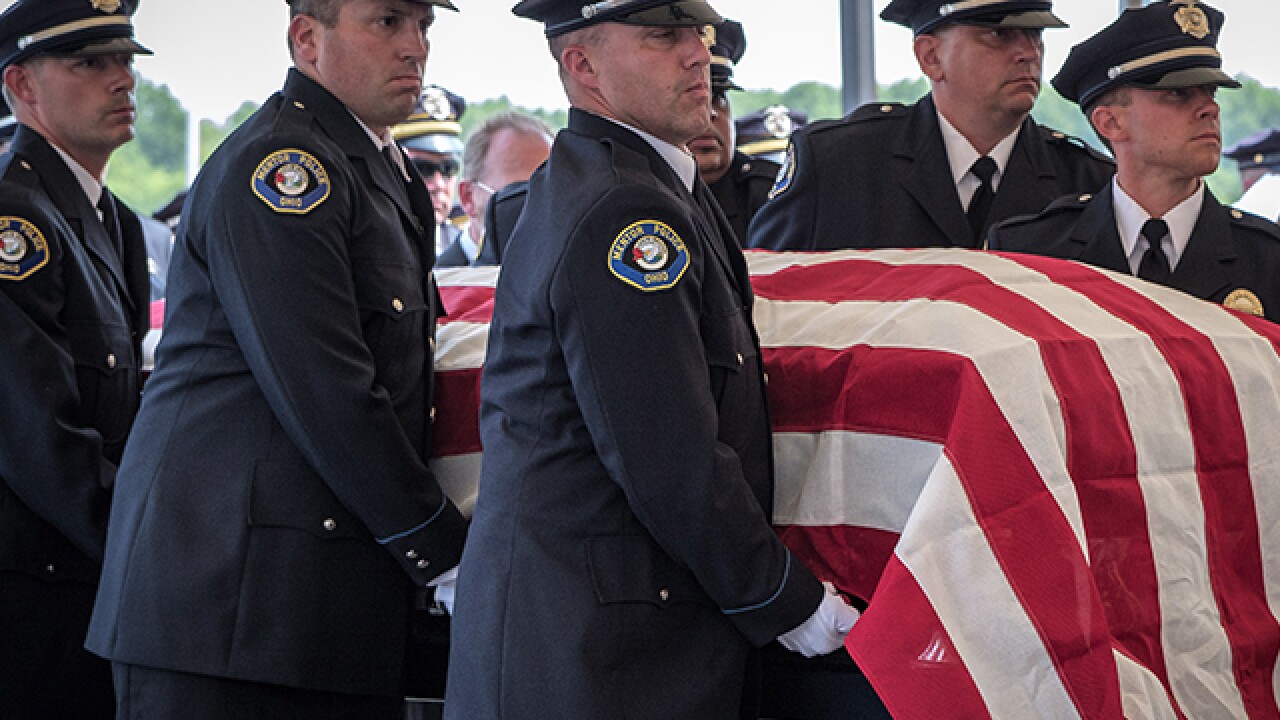 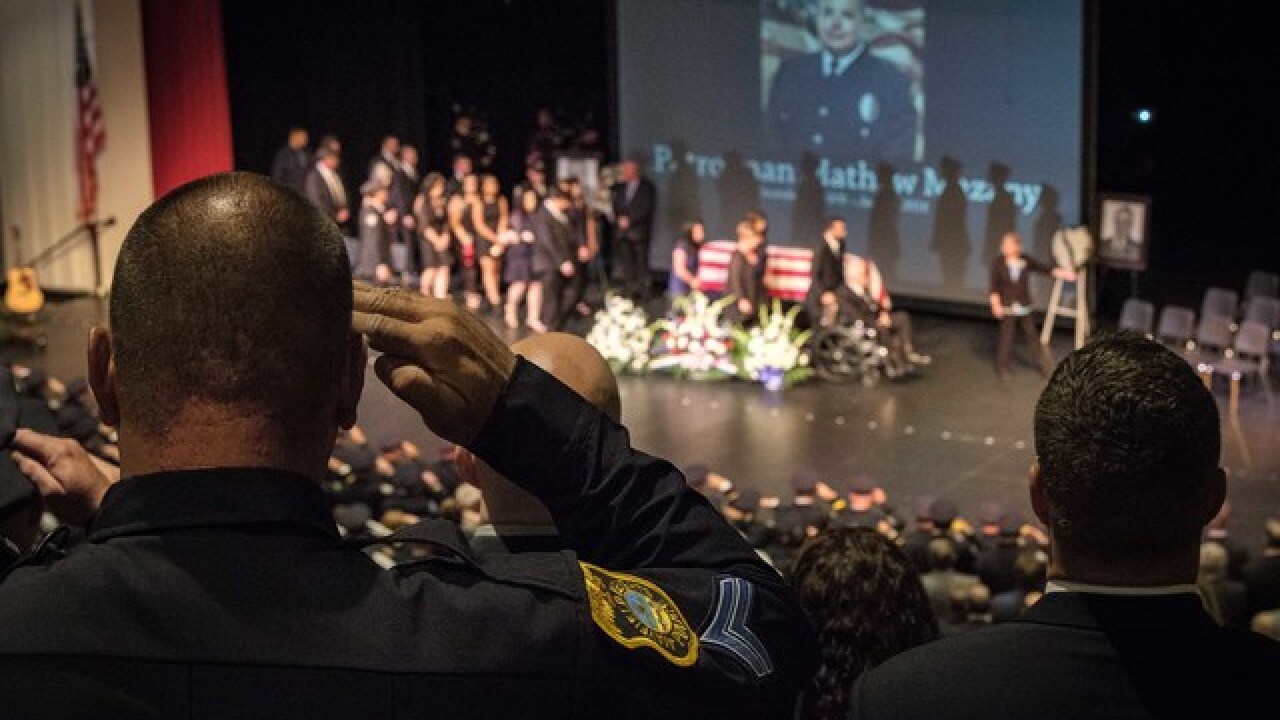 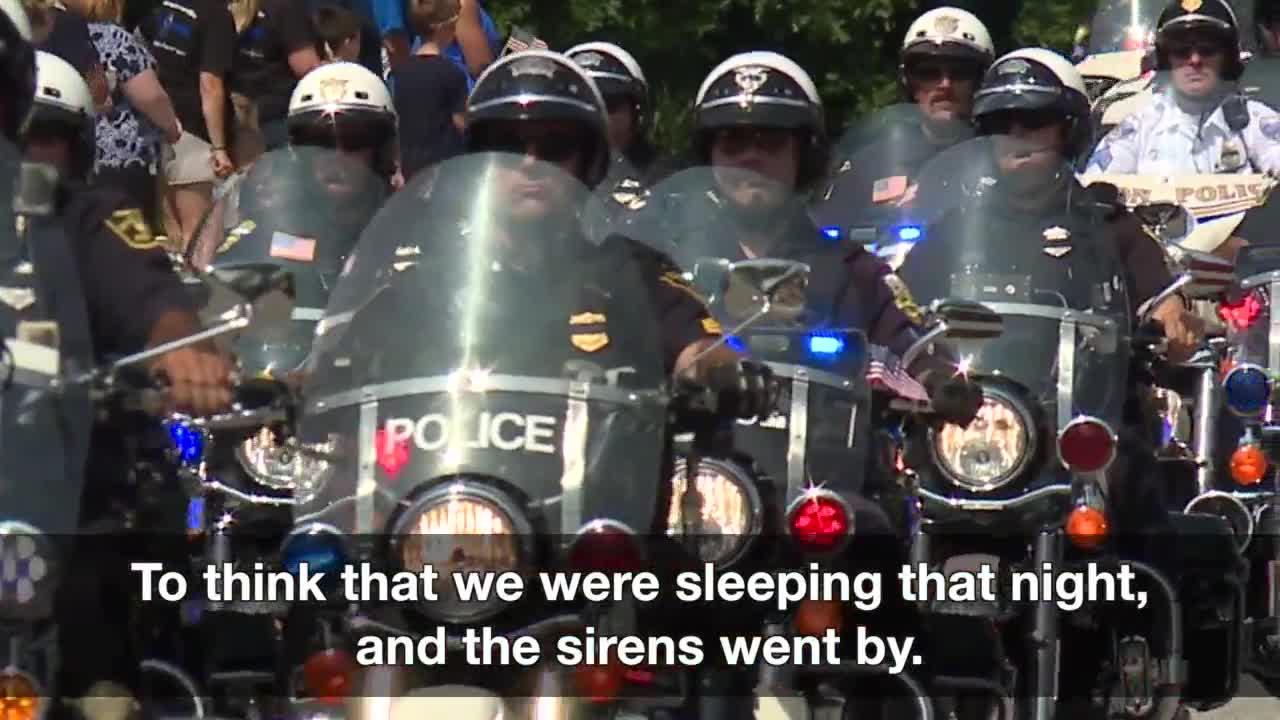 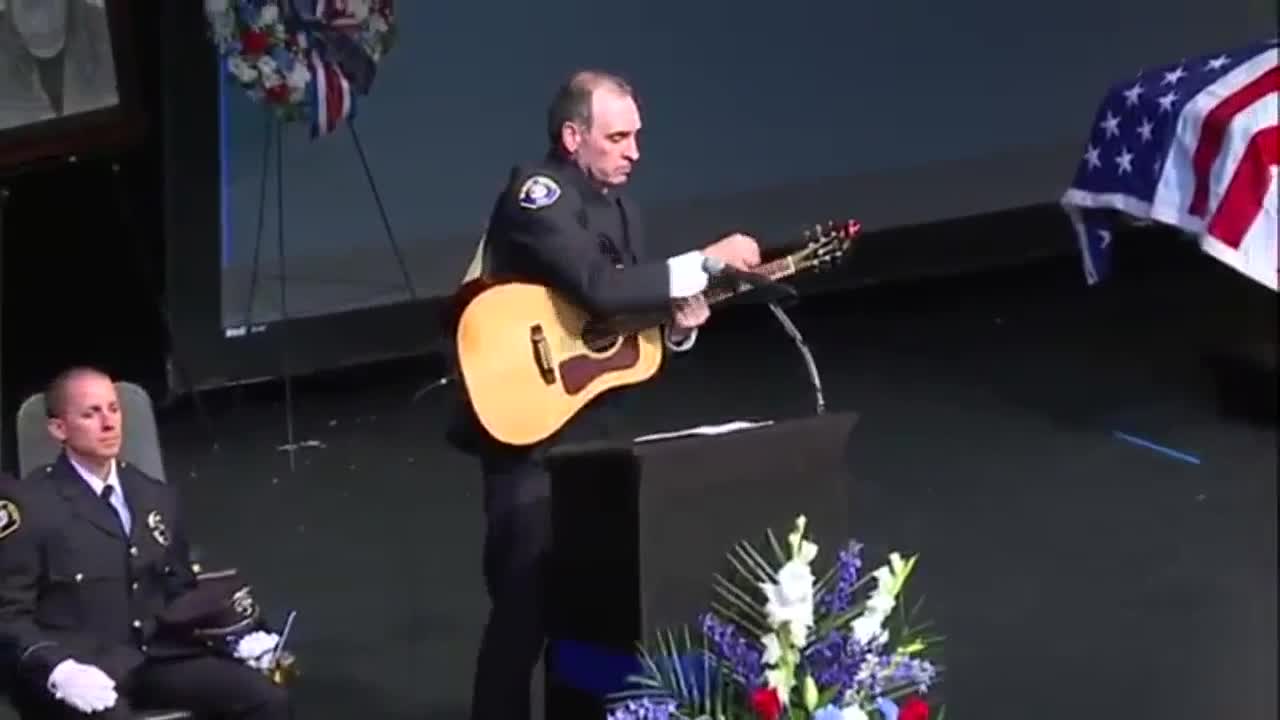 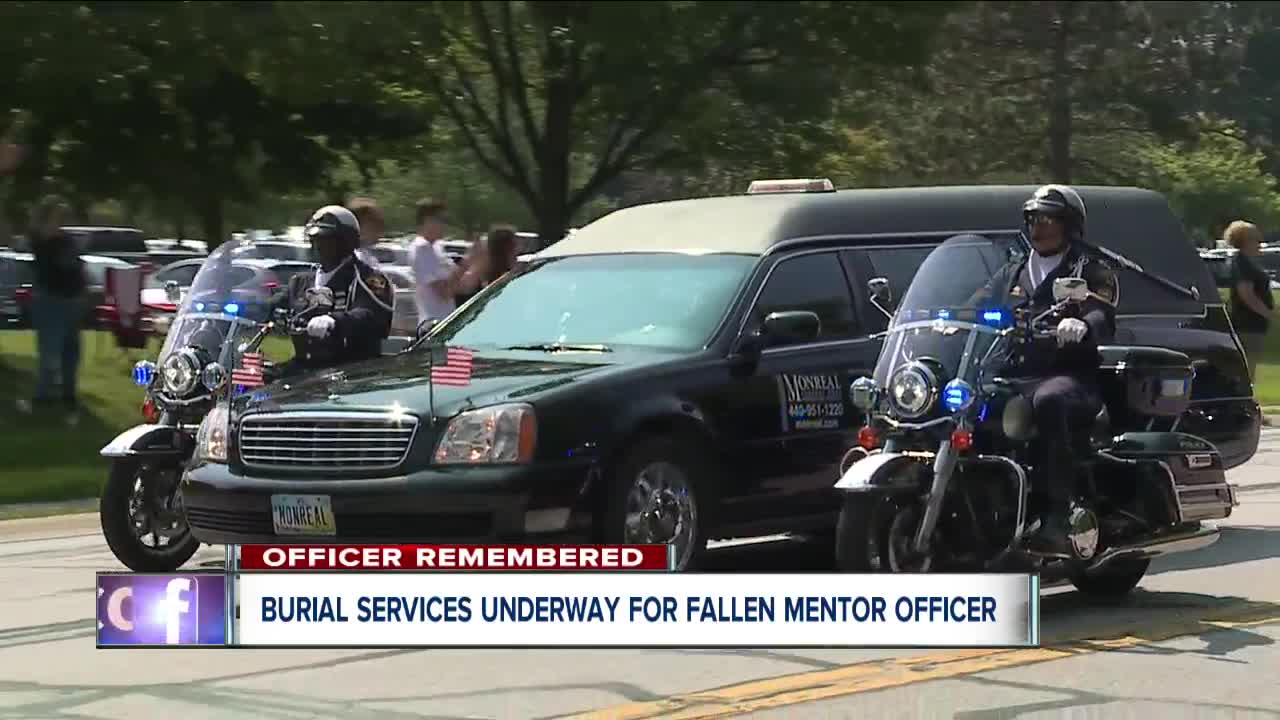 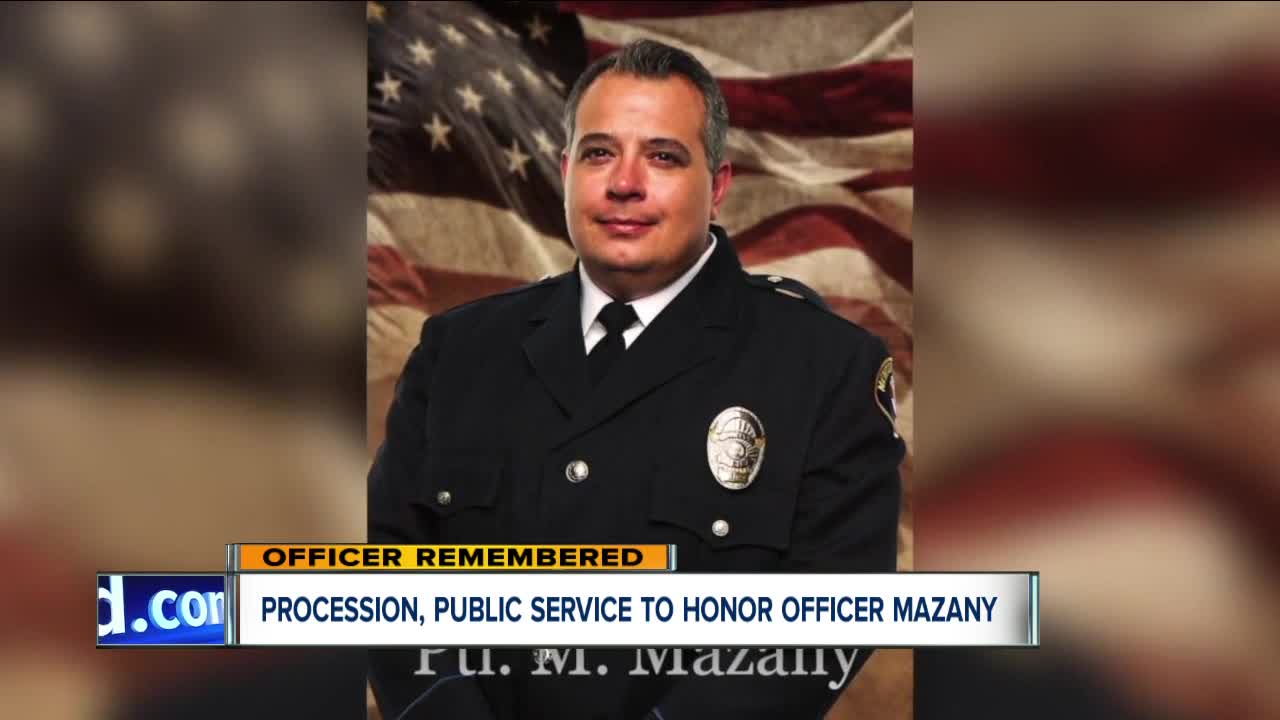 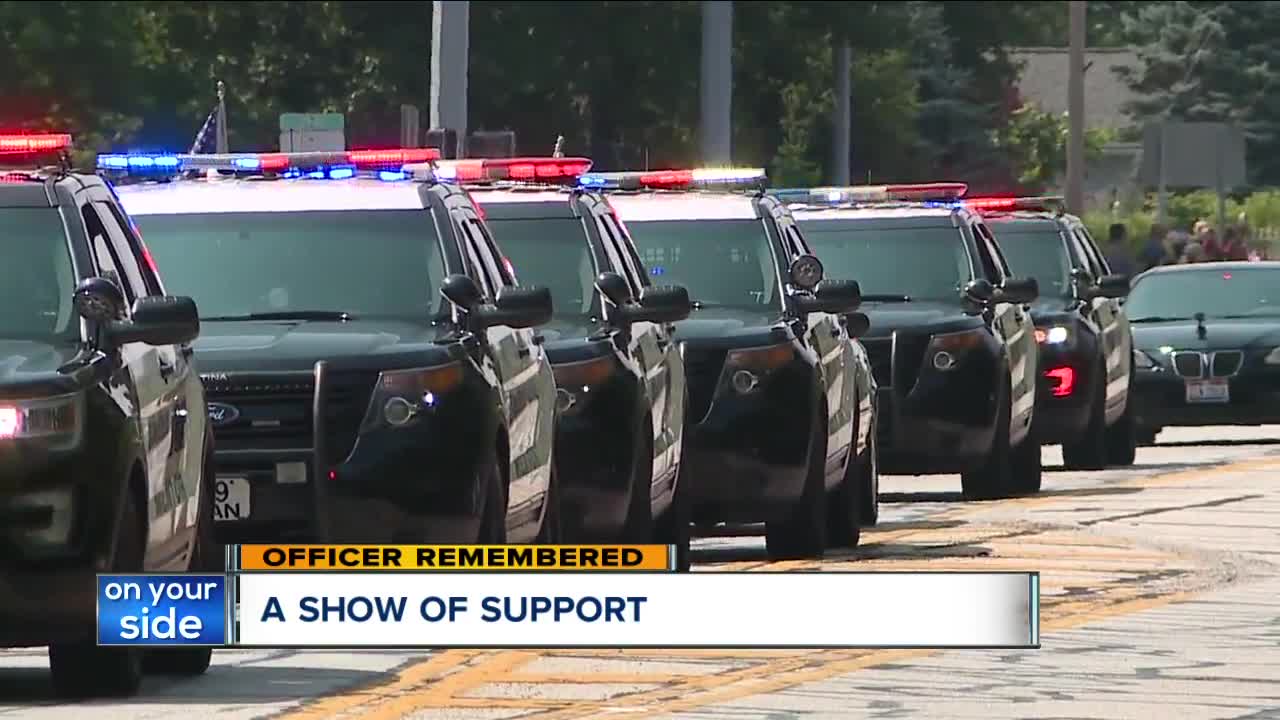 A public funeral service took place Monday for the Mentor police officer who was struck and killed in the line of duty Sunday, June 24.

The funeral service for Officer Mathew Mazany began on Monday, July 2 at 11 a.m. at the Mentor Fine Arts Center, located at 6477 Center St. in Mentor. Mazany was transported to the service via a 145-car procession.

"He's a hero now, to the community and you guys," Mazany's best friend, Jamie Bassell, said.

Officer Mathew Mazany was killed on the job. It was a job that those who knew him best say he loved.

"He said 'I love this job. And I love working with these people,'" retired Mentor Police Sergeant Scott Tkach said.

Mathew Mazany was a husband, a father, a brother, a son and a friend.

"He did his best to treat others with dignity and respect," Bassell said.

He was a nearly 14-year veteran of the Mentor Police department. His friends and family said he'd wanted to be a police officer like his father since he was a child.

He won an exceptional service award and had several local residents send letters to the police station thanking him for his service.

"Countless people have said to me that he helped them out on calls and took action in times of crisis that were decisive and effective," his brother, Mike Mazany, said.

His comrades called him unique and an old-school cop. According to them, he was no-nonsense but had a great sense of humor.

"One of his first days, he rolled into the back lot, cruising into the back lot in his big Lincoln, I knew he was gonna be a little bit different than what we were used to here," Tkach said.

Mazany enjoyed a cigar, a motorcycle ride, a glass of scotch and playing video games with his son, Mat.

"I will play them in his honor and leave a spare copy for him," Mat Mazany said.

His wife, Lisa, shared a letter he wrote for her the day he was sworn in as a Mentor police officer, almost 14 years ago.

"No matter what they pin on my uniform, nothing, nothing will make me more proud or give me more honor than the undying love and devotion you demonstrate every day," she recited. "For all that I am, in triumph and apathy, you are always there. And for that, I will always love you."

One thing clear in Monday's service honoring Officer Mazany and his memory: he protected lives in Mentor, but he's touched them everywhere.

"You guys were a lot like a 6-year-old me, you couldn't wait to tell everyone how proud you were of your officer Mat. I love you Maty," Mike Mazany said.

Mazany was called as backup to help with an arrest of a passenger who had a warrant out from another agency. He was standing outside of another police cruiser and began approaching the stopped vehicle when he was struck by a Jeep Wrangler, according to Mentor Police Chief Kevin Knight. He was treated by Mentor officers and firefighters on scene and then transported to TriPoint Medical Center, where he was pronounced dead.

Born in Maple Heights, his father served as an officer for 34 years. It was Mathew's childhood ambition to be a policeman. Over the years, the Mentor officer received letters from residents thanking him for his professionalism while out on patrol.

"He loved the midnight shift. He liked working with the younger officers," said Mentor's Chief of Police Kevin Knight.

He was a proud and loving husband, father, son, brother, uncle and dear friend. A tremendous loss is felt by all of those who were blessed and honored to know him. Mathew proudly served the Mentor Police Department over the last 14 years. Mat graduated from Crossroads Christian Academy in 1995. He went on to graduate from Tri-C’s police academy in 2002. Mat enjoyed smoking cigars, traveling and riding his motorcycle. He was also a sports car enthusiast. His charm and sense of humor left lasting impressions on all the lives he touched.

He was preceded in death by his mother, Bonnie Mazany.

The City of Mentor held a remembrance ceremony for Ptl. Mazany on the night of Tuesday, June 26 at the Mentor Civic Amphitheater.

A visitation for Ptl. Mazany was held on Sunday, July 1 from 2 to 8 p.m. at the Monreal Funeral Home.

According to Monreal Funeral Home, donations in honor of Ptl. Mazany can be made at any Fifth Third Bank location under the Mathew Mazany Memorial Fund. Donations can also be online through a GoFundMe campaign created by the Mentor Police Department.

Flowers and memorial gifts can be sent to Mazany's family through the Monreal Funeral Home's Sympathy Store.