Militia group appears at Statehouse to ‘protect people’ at rallies for Trump, Biden 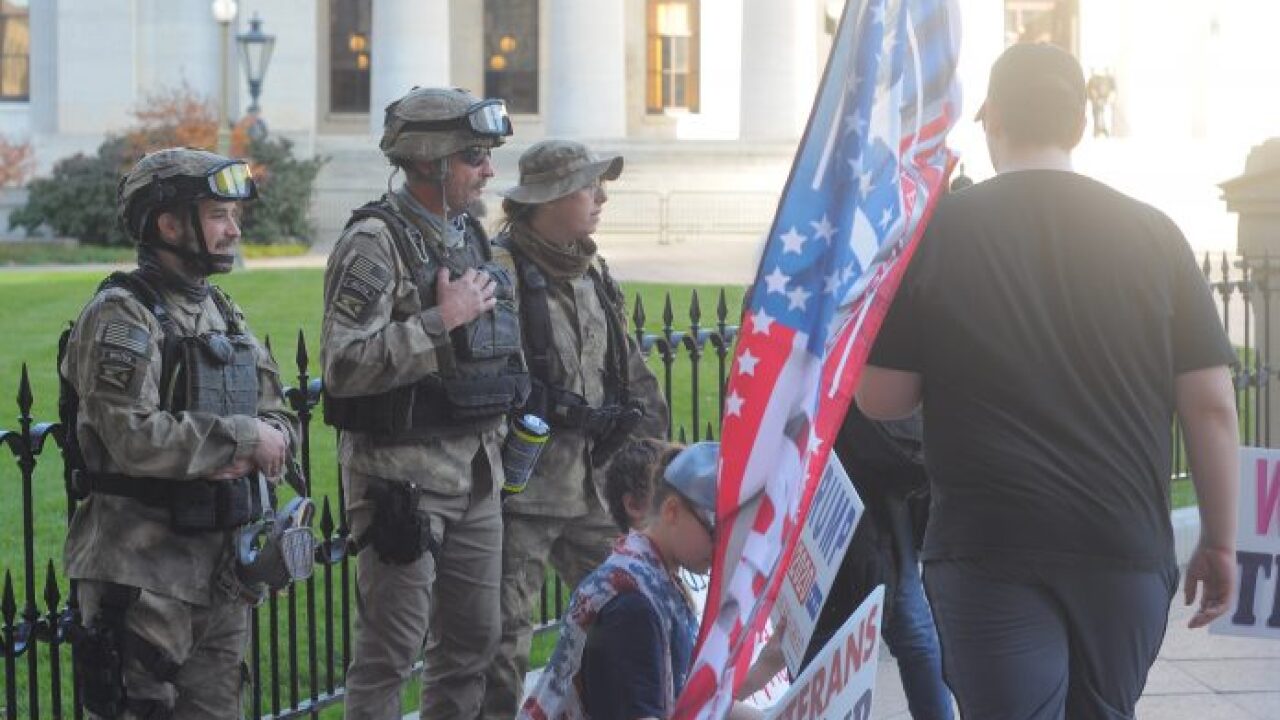 There were heated arguments, hymns sung over a PA, and horns blaring. A car performed a burnout before the crowd, emitting a smoky haze.

Between the crowds stood three members of a group that identified themselves as the “Ohio State Regular Militia.”

While the three declined to provide their names, a woman with the group said they weren’t there with any candidate, only to keep the peace.

“We’re not here to enforce the law,” she said. “We’re here to protect people.”

Though they described themselves as apolitical, all three said they voted for Trump and said they were carrying out duties resembling those of law enforcement.

“An event like this is open to a mass shooter from either side,” she said.

Armed activists have grown increasingly present at protests of coronavirus lockdowns in the spring, racial justice protests in the summer, and political rallies in the fall.

However, with political violence on the rise — men have been shot dead at recent protests in Portland and Denver, and militia groups came to Ohio this summer to plot a violent kidnapping of Michigan Gov. Gretchen Whitmer — there’s a growing fusion between political gatherings and guns.

Giovanna Loccisano, a spokeswoman for Ohio Homeland Security, said the department believes militias have the right to operate.

“Ohio is an open carry state,” she said. “Demonstrations can draw a diverse group of people and there can be public safety concerns with any demonstration. We are always prepared to act to protect individuals as they exercise their right to free speech.”

“These groups are treated like every other person, with the right to free speech and peaceful assembly.”

The Ohio Constitution states that “the military shall be in strict subordination to the civil power.”

Mary McCord, a former official at the U.S. Department of Justice who is now the legal director for the Institute for Constitutional Advocacy and Protection at Georgetown University, said groups don’t have authority to assign themselves to law enforcement’s duties.

The guns, while lawful, raise the temperature and put people on edge, she said. When people see uniformed men with guns, they interpret it as a sign of authority.

While the Second Amendment to the U.S. Constitution refers to a “well regulated militia,” the term is an anachronism — it refers to state-run militias of the Revolutionary Era, according to a landmark U.S. Supreme Court ruling from Justice Antonin Scalia.

In D.C. vs. Heller (2008), Scalia found Washington D.C.’s handgun ban violated citizens’ Second Amendment rights. However, he affirmed that the amendment “does not prevent the prohibition of paramilitary organizations.”

The “Ohio State Regular Militia” was not the only militaristic group in attendance Saturday.

They identified themselves only by their “call signs” — Dallas, Barstow, Tulsa and RJ.

Meanwhile, a wide spread of people in the Trump crowd wielded pistols suspended in waistbands and hip holsters.

One man in a red InfoWars shirt — an outlet ran by conspiracy theorist Alex Jones — yelled into a megaphone that the election was stolen from Trump. He carried a pistol, tucked in his waistband.

JT Novaria attended the protests as well, carrying a holstered pistol. He said he did so in the event of mass shooting or act of violence, and also simply because he’s allowed to.

RELATED: In-Depth: Experts give reasons for Ohio militia growth in 2020