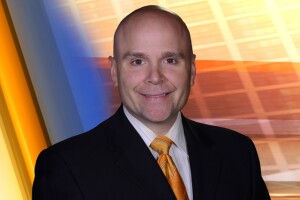 News Philosophy: If it’s something that affects a lot of people, is something out of the ordinary and can benefit our viewers, we need to cover it with accuracy and fairness.

Favorite Sports Team(s): I know I’m in Cleveland, but growing up in Pennsylvania we always followed the Steelers. I do love the Cleveland Cavs and the Indians! I also like the North Carolina Tarheels basketball team and The Ohio State Buckeyes.

Favorite Music: Pretty much everything but country or opera

Favorite Program: I watch a lot of sports and news; Newsroom TV series

My passion: Helping people through my job and outside of work. Plus, being with my family. They’re way cool.

Hobbies & Interests: I like playing basketball, golf and Euchre

Something most people don't know about me: I was a rap DJ for a few years and I once made 94 out of 100 free throws in a basketball contest.

What I like best about Northeast Ohio: Being closer to my family

You're most likely to see me around town at: sporting events, the movies or catching a bite to eat at different restaurants

On the weekends I love to: Hang out with my family and I try to catch up on my sleep.