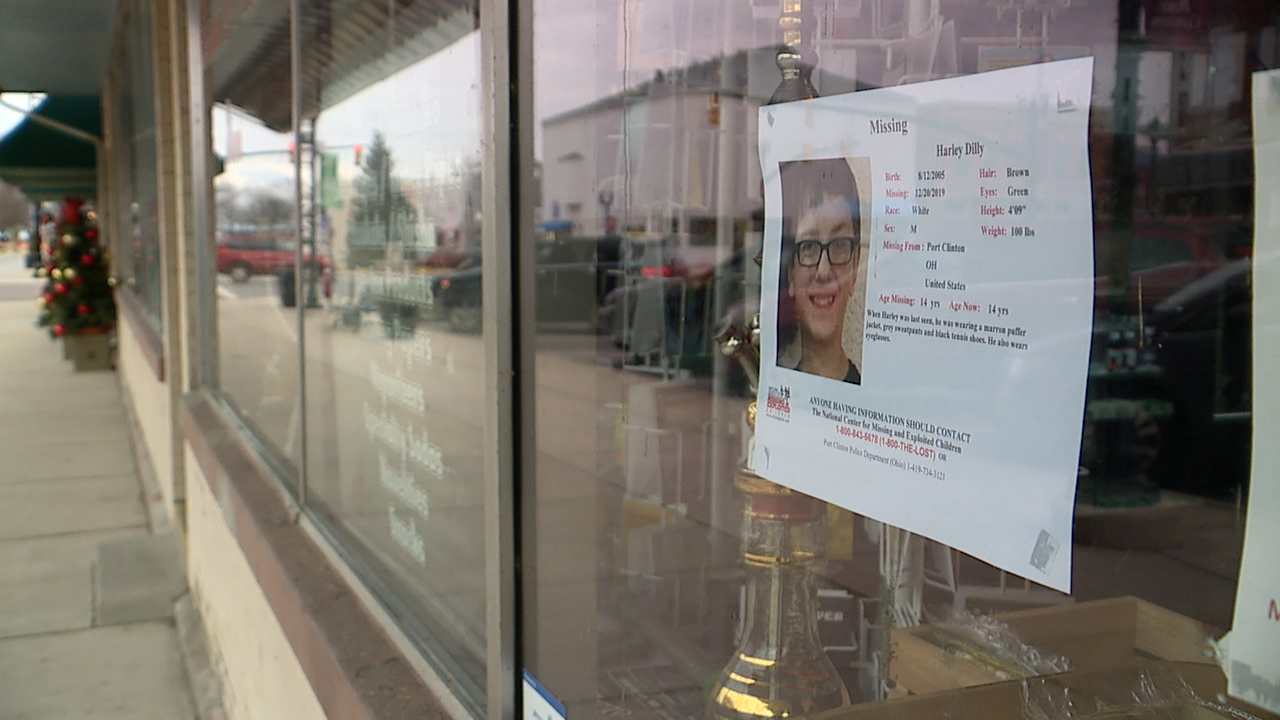 Bob Fenner
PHOTO: Flyers with information about Harley Dilly hang in the windows of businesses of downtown Port Clinton.

PORT CLINTON, Ohio — Harley Dilly, 14, went missing from Port Clinton since Friday, Dec. 20, when he was last seen walking to school in the morning. About three weeks later and after a nationwide search, Harley's body was found in the chimney of a vacant home just steps away from the Dilly residence in what police believe was a tragic accident. Foul play is not suspected.

During those three weeks, police and rescue teams searched a 150-acre area around Port Clinton. Thousands of missing flyers were distributed across the state and country by volunteers. Police requested residents to come forward with any information or surveillance video that could be useful to the investigation.

Harley’s family made several emotional pleas on social media and in the media asking for their son to come home, and for the community to reserve judgment of the family.

Port Clinton police advised multiple times that the family is fully cooperating with the investigation, and they have no reason to believe the family is involved in Harley’s disappearance.

Below is a timeline that details each day since Harley went missing, the day his body was tragically found in the chimney of a vacant home, and what has happened in the community since.

According to a newly-released police report, Harley was with several of his friends on the night of Thursday, Dec. 19.

On the morning Harley was last seen, he told his mother Heather Dilly he was not feeling well and asked if he could stay home, according to the police report. She told him that he had to go to school.

Police said that Harley was last seen around 7 a.m. on Friday, Dec. 20.

A friend of Harley's originally told police he had seen Harley after school Friday, but later said that he was mistaken, and it was after school Thursday that he had last seen Harley. Heather Dilly also later posted on Facebook that Harley was last seen at the school Friday afternoon, but that post has been removed.

A Port Clinton police officer and Dilly spend several hours visiting Harley's friends to see if anyone had seen him.

Heather Dilly posts to Facebook that her son is missing and to contact her, her husband or Port Clinton police if Harley is seen. The post has since been removed.

Port Clinton Police Chief Hickman posts to Facebook that police, the fire department and Port Clinton Schools conducted an extensive search of the Port Clinton area on the evening of Sunday, Dec. 22. Chief Hickman states that the investigation does not currently not indicate any foul play.

Chief Hickman states on Facebook that officers were checking “leads” and continuing to search for Harley though the night. Hickman acknowledges a community search party scheduled to begin at 10 a.m. at City Park.

Chief Hickman posts to Facebook stating that any and all leads about Harley’s disappearance are being investigated. He asks that users stop posting that he has been located, “unless WE the POLICE have actually notified you!”

Hickman also says their phone lines are “busy enough without having to deal with ‘rumors’!"

Hickman thanks the community for the tips and assistance, but requests that any future searches be conducted at the request of police.

Harley is listed as a lost, injured or missing person on the Ohio Missing Persons page on the Ohio Attorney General’s website. The missing person alert states Harley was last seen leaving for school at around 7 a.m. on Dec. 20 but never made it.

Heather Dilly posts to Facebook asking the community to continue to pray, keep their eyes open and share all information to police. She asks Harley to contact them if he sees the post, and thanks Port Clinton police, various individuals and the community at large for their help and support in the search for Harley. The post has since been removed.

Port Clinton police and the Sandusky co-founder of Bikers Against Abused and Neglected Children each offer $2,000, bringing the total reward to $4,000 for information leading to Harley's safe return.

Authorities say they had a 150-acre area to search Thursday, Dec. 26. Members of local, state and federal agencies were called in to assist in the search. Around a dozen K-9 teams, multiple drones and two helicopters were used to look for the teen. The search was called off for the night around 5:30 p.m.

Chief Hickman says he believes Harley is still alive until he knows otherwise. Police explain an Amber Alert was not issued because his disappearance did not meet the criteria – there was no evidence Harley was abducted.

Hickman tells News 5 that police responded to the family's home about a month previous after an argument between Dilly and his parents after they took away an electronic device.

Hickman describes Harley's parents as "cooperative" and "distraught" six days after anyone last saw their son.

"In the past when they have a conflict in the residence, Harley will go away for the night," says Hickman. "The first night was not uncommon for Harley to not be there."

Investigators say there was no sign of a struggle in the family's home. They also sent a cadaver dog into the house, but police say it did not find anything unusual.

The search for Harley goes nationwide, with plans to distribute missing posters across the United States.

Volunteers stream into the Port Clinton Police Department and take thousands of missing posters to hand out.

Chief Hickman confirms the FBI and the National Center for Missing and Exploited Children are now involved in the search.

Hickman asks residents to review home security recordings for any sign of Harley or anything suspicious, and to leave their porch lights on at night.

The Port Clinton Police Department posts to Facebook a statement from the Dilly Family:

The reward for information leading to Harley’s safe return increases to $7,000 thanks to checks from an anonymous donor and two local businesses.

Heather Dilly posts an emotional message and more images of her missing son on Facebook. The post has since been removed.

A candlelight vigil is held in Port Clinton with Harley’s family, friends and neighbors.

“You don’t know how it’s tearing us up,” Harley’s grandfather said to News 5 at the vigil. “It can happen to anybody’s child.”

A Port Clinton pastor advised people to ignore hearsay and gossip about the case on social media.

“The goal that is before us and that is to bring Harley home,” Tony Calloway said. “Without question, without speculation, without rumors and gossip.”

Harley’s mother posts another emotional message on Facebook, pleading for Harley to come home, and saying she is “sick of being judged.” The post has since been removed.

Ten days after Harley’s disappearance, Port Clinton have no new information, but say they are working tirelessly to bring the boy home. Chief Hickman does not tell News 5 whether anyone is actively searching for the boy, but said local, state and federal law enforcement are working together on the investigation.

In one of the Port Clinton Police Department's daily updates on Facebook, they advise readers that through the entire investigation, the Dilly family “has fully cooperated and we have no reason to believe they are involved.”

The reward for information leading to Harley’s return rises to $9,325, thanks to additional contributions from area businesses and donors.

Port Clinton police announce that the reward fund is now at $9,825 thanks to two additional donations.

In an on-camera interview with News 5, Heather Dilly says there are “no words” to describe what she and her family are going through.

"You see everything on TV, you watch all these crime shows and you think, 'Oh, that’s never going to happen.' And they solve it in an hour," Heather Dilly said. "It doesn’t take an hour to find out everything. You have subpoenas, you have warrants. It just, it takes a long time."

Harley Dilly's case had the chance to be featured on A&E's program "Live PD" on Jan. 4. The show follows officers as they patrol and investigate. Dan Abrams, the chief legal affairs anchor for ABC News, hosts the show, which has a segment that features missing children from around the country.

More than two weeks since he went missing, Harley Dilly's classmates return to school. Counselors were made available for students. Police were still asking the public to come forward with any surveillance video from the times between Dec. 19 and Dec. 20.

Volunteers, comprised of residents and public individuals from law enforcement, organize a search party. Since his disappearance, the search has been comprised of foot and aerial searches, including the Ohio State Highway Patrol's Aviation Unit. The reward for Harley reached $18,095.

READ MORE: Saturday's volunteer search for Harley Dilly back on after having been canceled due to bad weather

News 5 Investigators confirmed police, the coroner and BCI were at a vacant home near the residence of Harley Dilly. No details were provided about how the search was connected to Harley's disappearance.

The body of 14-year-old Harley Dilly was found in the chimney of an unoccupied home near the Dilly residence Monday after weeks of searching over 150 acres in Port Clinton, police said at a news conference. Foul play is not suspected and it appears the death was accidental, police said.

READ MORE: 'It appears to be accidental': Police say Harley Dilly was found in chimney of unoccupied home

Funeral arrangements for Harley are announced: his visitation will be held on Saturday, Jan. 25 from 11 a.m. until 3 p.m. at the Gerner-Wolf-Walker Funeral Home at 216 Washington Street in Port Clinton.

Port Clinton police confirm that the reward money that was raised by the community will go to funeral expenses for Harley, and the remaining funds will be donated to the National Center for Missing and Exploited Children.

The Lucas County coroner says that Harley likely died the same day he went missing, but there is no accurate forensic way to determine the exact time of death.

A petition is created on Change.org calling for the creation of "Harley's Law," which would legally require parents to report missing children in a timely manner.

Port Clinton police release the initial missing person police report about Harley, which includes several new details, inducing when Harley's father first reported his son missing, what Harley did on the night and morning before his disappearance, and that Harley's father told police his son was living with ADHD and autism. This timeline has been updated with several of those details.

News 5 will continue to update this timeline with the latest developments in this case as they occur.